It seems that October has finally hit here in South Carolina (finally!); yesterday was 73 and sunshiny, today the forecast is 55, the wind is blowing and everything is a bit grey. Lately I’ve been talking about some of my favorite spooky movies as we approach Halloween—and this is such a good one that I absolutely must talk about it.

Last night, I dreamt I went to Manderley again. It seemed to me I stood by the iron gate, leading to the drive. For a while, I could not enter, for the way was barred to me. Then, like all dreamers, I was possessed of a sudden with supernatural powers, and passed like a spirit through the barrier before me…

Holy Moses, I love this movie. Adapted from Daphne du Maurier’s novel of the same name, Hitchcock reworked the plot of the bestseller to keep the censors happy and ended up with nine Academy Award nominations and wins for best picture of the year and best cinematography.

Joan Fontaine is the unnamed narrator and the eventual second Mrs. de Winter. She is a shy and awkward companion to the insufferable Mrs. Van Hopper; while they are vacationing in Monte Carlo the mysterious and much older Maxim de Winter arrives. Although Mrs. Van Hopper tries to worms her way into an acquaintance with him, he’s much more interested in the companion.  He drives her to pretty locales for her sketching, they dine together, he takes her dancing… and then abruptly proposes when she is getting ready to leave. 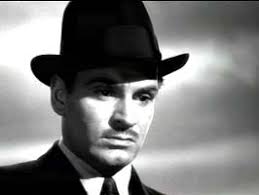 She joyfully agrees to marry the mysterious man whom she just met. Even while they are still in Monte Carlo, Maxim shows some of the classic Byronic hero signs: he is moody—inexplicably quiet and angry by turns; his personal history is whispered about but unclear—there are rumors of a dead wife; basically he is just completely unpredictable and unmoored.

Once they are married, the Mr. and Mrs. return to Manderley, the de Winter family estate. Manderley is an enormous gothic mansion in Cornwall with acres of grounds and an army of servants, led by the indomitable Mrs. Danvers.

Had Mrs. D a mind to, she could give Madame Defarge a run for her money. She is truly one of the creepiest women… definitely not who you want welcoming you to your new home.

Mrs. Danvers came to the house when Rebecca was a bride; a year after her untimely death, she’s still fanatically devoted to her dead mistress and jealously guards her position against her successor. Rebecca was everything that the second Mrs. de Winter is not: beautiful, charming, accomplished, confident, a perfect hostess and the expected match for someone of Maxim’s stature. The house is exactly as she left it, her rooms in the west wing—the best rooms in the house—are perfectly maintained by Mrs. Danvers; the second Mrs. de Winter  is so uncertain of her role at Manderley that she continually creeps about the house as if she were an intruder in fear of being caught.

Finally, after months of everyone whispering about what happened to Rebecca (and assuming that she, of course, knows all about it), the second Mrs. de Winter finds out the story: Rebecca was tragically drowned during a sudden storm while she was sailing alone off the coast. Her body washed up down the coast some two months later, was identified by Maxim and buried in the family crypt.

But Rebecca isn’t shut away in a cold tomb, she’s everywhere in Manderley. Mrs. Danvers asks the second Mrs. de Winter if she thinks the dead come back to watch the living. Throughout the movie, that is the suspicion and the fear: Rebecca is still here.

Rebecca’s capsized boat surfaces—with her body still in it—bringing up questions about Maxim’s previous identification of her corpse and the odd holes in the hull of the boat. The second Mrs. de Winter finally gets the real story: Maxim didn’t love Rebecca, he hasn’t been pining over her—he hated her. She toyed with him and his antiquated conventions, led a separate (and implicitly wild) life in London and threatened to bring the scandal to Manderley. Finally, she threatened the basic privilege of succession, telling Maxim that she was going to provide him an heir—the chance that the heir would biologically continue the de Winter line was slim.

Instead, Rebecca died. (This is the major point in which the movie and the book differ.) Is Maxim a murderer or was it an accident? How truthful is his story? How well does he represent Rebecca and his actions toward her? The movie says one thing but leaves room to question those assertions. Just as The Wide Sargasso Sea showed the other side of Jane Eyre, I’ve always wanted to hear what Rebecca had to say for herself. Like Rochester’s assertions of fairness to Bertha, Maxim is just a bit too invested in his version of the story to be quite trustworthy.

Mrs. Danvers agrees that Maxim’s story is perhaps less than valid—after Maxim is acquitted of any and all wrongdoing by an obsequious official, they return to find Manderley burning, flames lit by a vengeful Mrs. Danvers.

When I first saw this movie, around age 14, I loved it for the glamour of the beautiful house and leading man and sympathized with the gauche and awkward second wife. Now, a bit older, I still enjoy those aspects, but can appreciate so much more. The romance that I took for granted (they’re married, of course he loves her) is perhaps a bit less straightforward. The relationships between, well, everyone are tangled and interwoven and complicated. Everyone has a story—sometimes they are confirmed, often not. You, like the unnamed heroine, decide who you trust and what you believe.

The questions that linger—the past that never quite goes away—makes this a perfect addition to my list of Halloween movies.