Happy October! This month, in honor of that whole Halloween thing that is (quickly) approaching,  I’m planning to look at my favorite spooky movies. Starting us out, one of the classic dark comedies: Arsenic and Old Lace. And it’s even set on Halloween. Seren-freakin’-dipitous.

Mortimer Brewster and Elaine Harper are very happy newlyweds; they’re headed to Niagara Falls for their honeymoon, but before leaving they stop off in Brooklyn to tell their respective families about the happy event. While she breaks the news to her father and packs a few things, he goes next door to tell his aunts and brother of his marriage.

His aunts, the Misses Brewster, are the sweetest little old ladies on the block. They provide toys for the kiddies, supply broth for the sickly and advertise a room for rent to find even more people that need their help.

Mortimer’s brother, Teddy, lives with them. Teddy is quite affably nuts. He thinks he is Teddy Roosevelt: the stairs are always San Quentin (which he charges up with a shout), he blows the bugle every time something presidential has to be done, and he greatly enjoys going to the basement to dig locks in Panama.

As Mortimer fumbles around the living room, waiting for the aunts to stop fluttering on about a party for the happy couple, 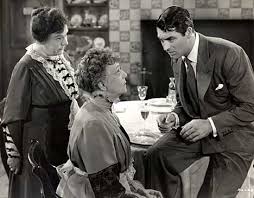 he absentmindedly opens the window seat… and finds a dead body neatly stashed within. Assuming that the affable Teddy is perhaps not always so affable, he gently breaks the news to the aunts: Teddy has killed someone and will have to be put into a home for the criminally insane.

Shock and horror! The body is not Teddy’s, the aunts claim that he is “one of our gentlemen.” The old and lonely men who inquire about the room ostensibly for rent don’t leave the premises. Instead, the aunts—in an act of mercy, pitying the poor men in their solitary lives—offer them blackberry wine from Martha’s special recipe.  And the arsenic gives it quite a kick. The body currently in the window seat is Mr. Hoskins, the thirteenth whom they have so assisted. And Teddy is down in Panama, digging the latest lock for the canal—which just happens to be about six feet long. Just like the twelve locks already down there.

While Mortimer is processing the fact that his beloved aunts have committed multiple murders, the other Brewster brother shows up: sadistic Jonathan hasn’t been heard from since he ran away as a teenager. But now he’s on the lam for thirteen counts of murder along with his evil sidekick/plastic surgeon, Dr. Einstein, needing a quiet place to wait out the manhunt. And Mortimer has to figure out exactly how to deal with all of the stark raving mad members of his family.

Ok, yeah. It’s dark. But the comic elements vastly outweigh all of those rather horrific undertones. Cary Grant was great at the comedy—if you’re only familiar with his later stuff, you need to see this movie for that reason alone. Patricia Lane as Elaine is pretty and engaging and often kind of befuddled, but her role is secondary to the focus of the action in the Brewster house. John Armstrong, as Teddy, is hilarious.

He peers over his spectacles, expecting and receiving the respect due to his presidential personage. Even the police salute him. Raymond Massey, as Jonathan, is the one truly scary person in the movie—but his menace is so over-the-top that the shiver almost immediately turns into a chuckle. Almost immediately.

The sniveling and cringing Dr. Einstein is played by Peter Lorre, who snivels and cringes quite wonderfully. (He’s more afraid of Jonathan than anyone else in the house—he’s seen what Jonathan is capable of.)

But the Misses Brewster make this show absolutely wonderful. They aren’t exactly amoral, and not overtly sinister… but underneath all of the flounces, ruffles and smiles, there are two very twisted ladies.

And what are your favorite Halloween movies? Any suggestions for my Netflix queue?