I have no idea how I missed this movie until now… it’s quite wonderful.

Claudette Colbert is Eve Peabody, an intrepid American chorus girl who finds herself penniless in Paris after pawning all of her belongings in Monte Carlo. Straight off the train, she meets Tibor Czerny, a Hungarian taxi driver played by Don Ameche, who drives her around Paris as she looks for a job. Although their mutual interest is immediate, Eve/Claudette 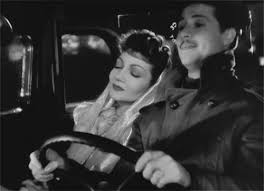 unceremoniously dumps him to crash a swanky party as the Baroness Czerny, where she meets the rest of our star-studded cast.

John Barrymore is Georges Flammarion (what a name!), an aristocrat with limitless finances and a wife who believes herself  in love with someone else.

Said wife is Helene, played by Mary Astor,and her someone else is the very suave Jacques Picot, played by Francis Lederer. 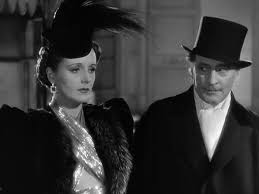 Georges wishes to keep his wife, but without her attachment; after noting Jacques’ fascination with Eve, he hires her to stick around and try to break up the happy pair.  They all decamp from Paris to the Flammarion’s estate, where it looks as though everything will work out as for all concerned: the wealthy Jacques wants to marry Eve/Baroness Czerny and Helene is left with her husband to console her. 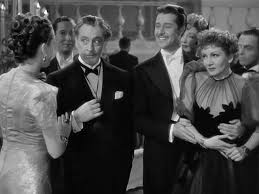 And then Tibor Czerny, the Parisian taxi driver, shows up. He plays along as the Eve’s aristocratic husband, quietly trying to convince Eve to leave. When that doesn’t work, the two begin a battle of wits, he presenting reasons to the group that the couple must immediately leave, she responding with negations of his reasons.

Finally, he comes clean and reveals that he is not the Baron Czerny, he is a Parisian taxi driver; they met only days ago; and she is certainly not the Baroness Czerny.

The Baroness Czerny bursts into tears and claims that he is having one of his spells—it seems that insanity runs in the family: his grandfather sent them one roller-skate covered in Thousand Island dressing as a wedding present, one of his aunts used paprika for face powder, causing everyone to think she was Indian. At least, that’s what Eve claims.

Finally furious, he agrees to the divorce that Eve needs from their fake marriage to actually marry the wealthy playboy… but the divorce proceedings don’t exactly proceed smoothly.

The movie gets its title from Eve’s worried assertion that “Every Cinderella has a midnight.” This Cinderella doesn’t, though, not really. Although the secrets and hidden identities are eventually revealed, no one is too angry about the deception, everybody stays with or gets with the one they are supposed to be with and, most essentially, everyone goes home happy.