I’ve finished two absolutely fantastic books since my last review: Miss Peregrine’s Home for Peculiar Children, by Ransom Riggs, and A Very Long Engagement, by Sebastian Japrisot. Both were extraordinary. You should read them. Hold tight, I’ll tell you why.

First of all, the hiding: 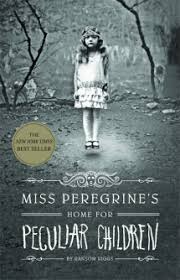 Jacob’s grandfather has always been odd—since Jacob was very small he has told unbelievable stories of his life after his childhood evacuation from Poland. His treasured snapshots are obviously the stuff of fantasy: the levitating girl must be wired to the ceiling, the child in the bottle is likely created through some sort of double-exposure, the strong girl’s boulder is probably made of foam. Like his parents, Jacob discounts the stories his grandfather tells—and his grandfather’s increasingly illogical terrors—until tragedy strikes. Jacob finds his grandfather in the woods, apparently mauled by wild dogs, panting out the last moments of his life. His dying words instruct him to find the bird in the loop, ravings which are forgotten as Jacob apparently inherits his grandfather’s madness, seeing monsters with mouths full of writhing tentacles in the darkness.

Jacob, with the help of his newly-acquired psychiatrist, convinces his parents to let him take his summer vacation on the remote Welsh island where his grandfather spent his first years outside of Poland. Hoping to figure out what his grandfather was raving about, or at least to exorcise some of his personal demons, he looks for the refugee home that his grandfather lived in but is disappointed to find it has long since been abandoned.

Then, amazingly, he finds the people for whom he has been searching. And they have been hiding from the monsters for much longer than anyone could have expected.

Lordy, this was a good read. The correlation between the encroaching Nazis, the bloodlines of the special children, and the searching monsters is slight, submerged, but extraordinarily powerful. The horror of the dying grandfather profoundly affected me, and the adolescent first person narrator just made all the horror more disturbing. Read it.

Manech died during the fighting at Bingo Crépuscule  in January, 1917. His fiancée, Mathilde, is convinced that there is more to the story than the heartbreaking telegram revealed and begins piecing together the events of that tragic night.

Five French soldiers were condemned to death for the crime of self-mutilation. Although there are rumors that a pardon was granted, they were thrown over the trench into No-Man’s-Land, provoking a firestorm that allowed the French troops take the German trench. Mathilde learns each man’s incredibly detailed and fascinating history as she investigates the fate of her beloved.

Some years after the publication of the book, an extraordinarily good movie adaptation of was released. (It’s one of my favorites. Of all the movies in the big, wide, beautiful world.) Audrey Tautou is Mathilde, Gaspard Ulliel is Manech; Marion Cotillard and Jodie Foster play small but important roles. The book is good, yes, but if you haven’t seen the movie you should order it immediately. It’s that good. The book is more detailed, the stories are a bit more complete, but the filming of the battles in the movie is extraordinary. The wind-blown fields of wheat remained in my mind’s eye long after the screen went dark.

Whether you choose the movie or the book, rent, buy or check out a version of this story. Incredibly good.

And that’s what I’ve been reading. How ’bout you?