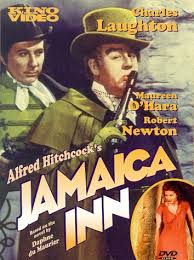 The movie bears little resemblance to the book. (Du Maurier reportedly hated it so much that she almost didn’t let Hitch direct Rebecca. Glad she relented!)

The setting is the same: a lonely inn set in Cornwall; Mary Yellan still travels to live there with Patience and Joss Merlyn; Joss’s band of men are still engaged in the criminal activities of the novel; Joss is still working for an unidentified local man.

And that’s where the similarity ends. In the book, either Jem Merlyn or Friar Francis Davey could be directing Joss’s activities. Mary’s inability to tell who is good and who is bad (and indeed, the fact that no one is wholly good or wholly bad) provides the novel’s suspense. The movie eliminates both of those characters (Jem and Friar Davey) and instead turns Jem Merlyn into Jem Trehearne, and Friar Davey into Sir Humphrey Pengallon.

Jem Trehearne, played by Robert Newton, is an officer of the crown who has been sent to infiltrate Joss’s group and find out who Joss is working for. Mary meets him while posing as a criminal, but he’s obviously thoroughly honorable—as his familial connection to Joss Merlyn has been dissolved so has any mention of previous criminal activity.

Friar Davey is gone too, replaced by Sir Humphrey Pengallon, played by Charles Laughton. Pengallon is a local squire, the most respected man in the area. He is also quite mad.

So, since it eliminated nearly all of the good stuff in the book, why am I talking about this movie?

Oh. my. god. Instead of indiscriminate menace of the book, the danger is localized. If you are female, you are in danger—and a specifically sexual danger.

Aunt Patience’s screwed up relationship with Joss is actually in the book, it’s just heightened a bit.

Mary, though, is way more vulnerable than she is in the book. She’s overtly objectified from her entrance: Squire Pengallon is discussing the owning of beautiful objects. She enters, he tells her to take off her cloak, to turn so he can see her figure, and starts quoting Byron (“walks in beauty like the night”), and then starts directing her life from behind the scenes.

There’s a specifically sexual threat from Joss—she arrives at the inn, and he demands a kiss before she is allowed inside; the other men comment admiringly on her and he tells them to stay away from her because he “is looking that way himself.”

The primary threat, though, is from Squire Pengallon. When Mary rejects his advances, she is gagged and tied and taken anyway.

It’s not just the control issue—but she’s controlled in such an eroticized way. She’s screaming, then she has the handkerchief in her mouth, the light shining off her tears, hands tied behind her back, cape hiding it all.

Mary in the book has to decide who to trust—while her choices are not abundant, she decides, she chooses the next step in her life. Mary in the movie isn’t an actor, she is repeatedly acted upon. She’s tied up and shuffled from one place to another. She’s essentially a prop, an object that is stolen and then lucky enough to be recovered.

This is perhaps not the most well-known Hitchcock/du Maurier connection (stay tuned for Rebecca and The Birds) but, in my humble opinion, it is so very interesting because of the drastic differences between the source and the adaptation.