I drive a lot. My university is 45 minutes to an hour away from my house; I drive a minimum of six hours a week. This week I added a round-trip to Atlanta, three hours each way, and a two extra trips to the university (for library marathons.) I drive a lot.

And so, to resign myself to my fate of spending way more hours of my life behind the steering wheel than I’d prefer, I listen to audio books from the library. It makes me feel like I’m not wasting the time I spend driving– I could almost convince myself I’m doing what I please, instead of what I must do.

March, by Geraldine Brooks, is one of my recent library finds. I listened to it this week as I drove,  and I kept finding myself driving slower and slower, sitting in my car after I arrived at my destination, lingering just a bit more, to get to the end of the chapter, just to find out what happens next.

I used to do that when I was a child, as most of us bookworms did–one more chapter, to the end of this part of the book, just a few more pages, mom–and then the furtive reading at the night light and the red-rimmed eyes and fragile emotions at school the next day.

Surely I wasn’t the only one. 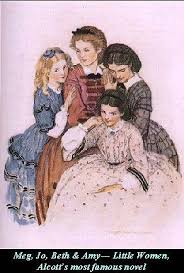 I remember the first time I read Little Women: the family was driving up to Kentucky for the holidays, and contrary to the customary (and legally sanctioned) seatbelt/back seat arrangement, for some reason I was allowed to make a pallet in the back of the station wagon. I read the whole way there: Christmas Pilgrim’s Progress, Meg’s hot flush of shame at the party, Jo’s penny dreadfuls, Beth’s kittens. I never really thought about Mr. March- he was just away, as Marmee was always busy, allowing the four girls to operate somewhat independently, as is necessary in the best adolescent literature.

This is a roundabout way to convey the love that I have for Louisa May Alcott’s world–I re-read several of her books last year, Little Women and Little Men included, I’ve wandered all over Orchard House in Concord, I have a well-worn and much loved t-shirt that proclaims “Little Women Grow Up to be Great Women.” I love those books. 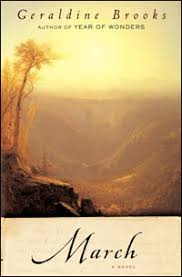 And I love this book. It is completely different than Little Women– disillusioned and depressing and heartbreaking. I’m a southerner (surprise! check out the blog title), and honestly, I often feel a little overly inundated by all of the Civil War stuff… but Brooks conveyed the horrors of slavery with a deft, but extraordinarily cutting, touch. Slavery is seen in the novel primarily as it effects one woman, a woman of mixed parentage who is a slave on the estate of her natural father. Mr. March encounters her when he is an idealistic and impassioned youth, long before meeting Marmee, and then again, more than two decades later, as he is serving as chaplain in the Union Army. Her name is Grace, and she is haunting.

Marmee is haunting too–in Little Women she is so angelic as to be a stereotype. She remains that in the first half of March, which is all from Mr. March’s perspective as he is in war. (Ms. Brooks complicates the ideas of ‘just war’ even in this so revered a cause. She actually does an amazing job of presenting the moral costs of slavery… and of embarking on a violent course to end slavery.) March refers constantly to Marmee, who seems to be as much lodestone as companion, and whose violent feelings about abolition compel some ill-advised alliances for Mr. Marsh. But all, you think, is well and good, as Mr. Marsh has lost the family fortune for the cause, has personally gone to war, has done what he can.

The portrayal of Marmee’s side of the story, half-way through the book, is kind of an electric shock. Such vast deeps of miscommunication and incorrect assumptions and living up to what each thinks the other expects and what society expects.

I’ve said too much, and I’m not trying to give any spoilers. Suffice to say: this was a wonderful, wonderful book. It’s complicated and disturbing and has completely shifted my view of this one portion of a well-beloved story without destroying the fabric of the original.

But don’t take my word for it. Read it yourself!