As I’ve mentioned before, I catalog my reading over on LibraryThing. Truly one of my favorite websites–so much fun for those of us who can’t stop talking about whatever we’ve been reading.

I’m in the “100 Books in 2011” reading group, as I was in the “100 Books in 2010” last year and 2009 the year before that.  Everyone in the group (and anyone can join) has a thread to which they post each of their completed books, with the goal, obviously, of hitting 100 by the end of the year. (It’s a random goal, and if taken too seriously could restrict the reading choices (skinny over chunkster) but that doesn’t really seem to be a problem.) Some of the members just list titles and authors of completed books, but most (like me) review the book or just babble about what they liked/didn’t like.

You get to know the other people in your reading challenge through their profiles, reading choices and reviews. So when I post about loving such and such book, the other members of my group and I discuss what is great about that and other books, what other authors might be good to go to from there, random memories associated with whatever books, pretty much whatever. It’s like a book club for those of us who don’t want other people to tell us what to read. I love it.

Also, it forces you to think critically what you’ve been reading for fun–rather than just feeling slightly dissatisfied at the end of an Anne Perry mystery, say, since I’m writing about it, even in an informal setting, I have to figure out what didn’t work, for me, with the book.

At the end of each month, I summarize that month’s reading: how many books I’ve completed, the author demographics, genre demographics, what my favorite book of the month was, and whatever else seems important at the moment.

(I’m giving all of this information because I’m trying, thus far with limited success, to integrate my reading into this blog. At the end of every month I summarize over on LibraryThing, so I plan to carry the same over in this arena.)

I’ve already posted about Major Pettigrew’s Last Stand; here’s what I had to say about Possession: 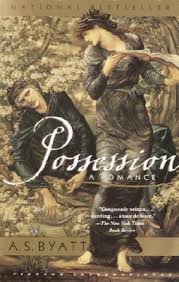 This is at least the fifth time I’ve read this novel, and every time I kind of just want to flip back to the front to re-read it. The first time through I focused on plot–who is it, how does it happen, what happens next (although so much happens that that effort has spilled over into subsequent readings); the next time through I noticed the word plays- after finishing it I sat down and listed three pages worth of ways Byatt plays with the word “Possession.” (Lots of ’em. From the obvious Spiritualist sense, to a romantic sense, to an acquisitory sense, and then within each of those categories multiple variations–possession of a society by an idea (Darwin for the Victorians, Freud for us)… and so on.) This time through I focused on the letters and stories that intersperse the “real” plot.

I think I’d barely skimmed these the first few times I read the novel, anxious for advancement in whatever plot line I was most interested at the time. They are amazing in their own right, and such a literary device  to let us (the reader, the modern researchers in the story) actually hear the voices of the Victorian academics. So good. This book gets better every time I read it–I picked it up this time after finishing a chapter in The Madwoman in the Attic, by Gilbert and Gubar, which talked quite a bit about glass castles and keys and dual perceptions of female nature… made the intervening fairy tales so much more interesting, and made me actually try to listen to what Byatt was saying about the development of the characters.

I’m babbling. But this is truly the best book. Might be my favorite. ever. of all the books in the beautiful world. And that’s huge.

So, in case you are interested (and the foundational presumption of a blog is, indeed, that everyone is intrigued by every little working of your mind), here is the rest of what I read and reviewed in January and February.

But enough about me. What have you been reading?